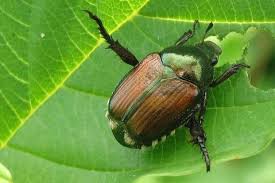 Japanese beetles were first documented on the East Coast in 1968. Over the decades, they've eaten their way westward.

The beetles spend much of the year underground, emerging from July to September for mating and eating. They are susceptible to drought and a few fungal conditions, but they have few natural predators in the United States. Pesticides have limited effectiveness, and even if gardeners manage to kill the ones in their garden beds, a new batch could fly in at any time.

Effects of Japanese Beetles
After a beetle invasion, valued plants and trees are unsightly, but they rarely will have permanent damage. Your plants may look bad, but the beetles rarely kill trees and flowers.