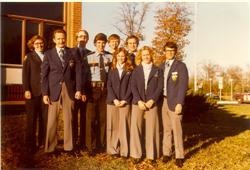 After the was founded in 1973, Public Safety Director Jack Hacking, along with one of his officers, visited every neighborhood in Eden Prairie. They held 35 meetings with residents in their homes in addition to meeting with the Lions Club, the Chamber of Commerce, the Jaycees, the American Legion and the Eden Prairie Athletic Association.

At these meetings Chief Hacking asked the participants what type of department they wanted including what level of police and fire service they expected. The residents’ main priority was that their children to be able to trust and respect the officers. In addition they wanted the police officers and firefighters to be well trained, particularly in the area of medical response.

Equipment and Facilities
1973: The department’s original vehicles were two marked 1973 Plymouth Fury squad cars and a marked motorbike for trail and off-road patrols.

1974: The Public Safety Department moved from their original facility in the Central Fire Station at 7801 Mitchell Road to the Water Treatment Plant at 7905 Mitchell Road.

1975: The Public Safety Reserves got their own vehicle: a Chevrolet Blazer, funded largely by the Eden Prairie Lions Club.

Oct. 29, 1973: the Eden Prairie Crime Prevention Commission held its first meeting. The purpose of the commission was to act as a liaison between the Public Safety Department and the community.

1975: The department created a Crime Prevention Unit that was a model for other departments throughout the midwest. The EPPD was asked to conduct training sessions for departments in Minnesota, Wisconsin and Iowa.

1973: Sherry Richardson was hired as the department’s first secretary.

1975: Officer Bob Tyson was named Minnesota Officer of the Year by the Minnesota Chiefs of Police Association.

1977: Jim Clark was named Minnesota Officer of the Year by the Minnesota Chiefs of Police Association.