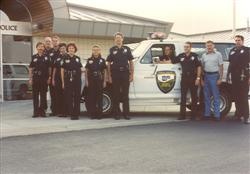 Crimes
May 1984: A 17 year-old Eden Prairie boy was arrested for the random brutal stabbing of the night manager at Driskill’s SuperValu.

1986: A 14-year-old boy was charged with stabbing a 26-year-old woman in her home after posing as a door to door salesman.

1986: Officer Janet Koch and K-9 Major helped with the detection of $1.2 million in drug money that was recovered at the Minneapolis-St. Paul Airport. The City of Eden Prairie received $250,000 of the money under a federal forfeiture law.

1989: An armored car was robbed in front of the First State Bank of Eden Prairie by three masked men carrying machine guns. A substantial amount of money was taken. Although the case aired on NBC’s “Unsolved Mysteries,” no one was ever arrested.

1982: A second K-9 Unit was added with Officer Jim Matson and Hawkeye.

1989: The Traffic Unit was organized to address increasing concerns regarding traffic enforcement and accident investigations.

Equipment and Facilities
1983: The Public Safety Department moved into a new building at 7900 Mitchell Road.

1986: The department purchased two motorcycles to patrol the river bluffs and the highway 62 construction, among other areas.

1988: The department split from the Fire Department and was renamed the “Eden Prairie Police Department."

1990: The EPPD installed its own 911 radio system. Previously the City had contracted with the City of Richfield to provide dispatch service for police cars, ambulance service and fire trucks. The new equipment was donated by Eden Prairie-based E.F. Johnson who chose to use Eden Prairie as a test site.

Events
July 1985: Three adults and one child were killed in an airplane crash at Flying Cloud Airport.

July 1987: A state of emergency was declared in Eden Prairie by federal officials after the City received 11.3 inches of rain in one night resulting in flooded basements, damaged roadways, mudslides and major washouts of river bluffs.