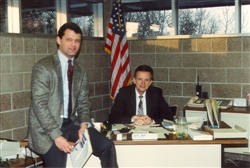 Crimes
Nov. 1993: Grant Hussey, a 15-year-old Eden Prairie boy, was abducted from the Eden Prairie grocery store where he was working. Hussey’s body was found four days later in Shakopee, along with that of a 30-year-old neighbor, Stephan Eastburn, who had been accused of sexually abusing Hussey earlier that month. The case was ruled a murder-suicide.

Dec. 1993: A cross was found burning in the front yard of an African-American Eden Prairie family. Two juveniles were arrested.

Feb. 1997: Eden Prairie officers fired their weapons for the first time in the department’s history after being fired upon by a suspect in bank robbery that occurred in Chanhassen. No officers were hurt in the incident. The suspect was apprehended.

March 1997: An employee at the Eaton Corporation shot and killed his coworker at their Eden Prairie office. The suspect surrendered later that day.

Sept. 1997: A 19-year-old college student was shot and killed by her boyfriend in the parking lot of Magnetic Data in Eden Prairie. He then shot himself.

July 1999: An Eden Prairie woman, Valantina Voigt, was reported missing. An extensive investigation involving multiple agencies led to the discovery of her body and the charging of suspect Jason Buford with Second Degree Murder.

1994: The EPPD moved from its facility at 7900 Mitchell Road to 8080 Mitchell Road where Eden Prairie City Center was remodeled for City Hall, Police, PROP, the school district and CH Robinson.

Feb. 1996: Automated External Defibrillators (AEDs) were put into service for the first time in Eden Prairie.

June 2000: EPPD squad cars changed from white with blue and green markings to the more traditional black and white cars, which are still used today.

Staff
1991: Keith Wall, one of the original six officers, retired as Chief.

January 1996: The first class of the Eden Prairie Citizens Academy commenced with 16 students.