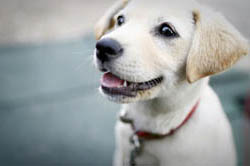 According to the American Pet Products Association, 47% of households own at least one dog.

In Eden Prairie, it’s not uncommon to see residents walk their dog companions around the block, on park trails or at dog parks. Most families describe these pets as part of the family. Our City encourages responsible pet ownership.

Dog Ownership
All dogs 6 months and older living in Eden Prairie are required to be licensed with the City. Owners are required to show proof of rabies vaccination when applying. Dog licenses cost $20 and run on a calendar year. They are issued for a two-year cycle and can be purchased by mail or in person at the City Center.

Leash Law
Like most cities, Eden Prairie has a leash law. Pets are required to be on a leash, not to exceed 6 feet in length, when they are off their owner's property. If your dog loves to run free, visit one of Eden Prairie’s dog parks.

At-Large Animals
Eden Prairie City Code chapter 9.07, subd. 6A states that it is unlawful for the owner of any animal to allow the animal off the owner’s premises unless controlled by a leash, not to exceed 6 feet in length. An exception is made only if the animal is on private property of another with the landowner's permission, provided the animal owner is present.
Barking Dogs
Eden Prairie has a barking dog ordinance. Dog owners may not allow their dogs to unreasonably disturb the peace and quiet of any person in the vicinity. Specifically, dogs are not allowed to bark more than 30 times in a 10-minute period. If you hear a dog barking excessively please call 911 and an Animal Control Officer will respond.
Bites
Animal bites are required by law to be reported to the Police Department. If someone has sustained a serious injury, call 911 for police and medical response. All dog and cat bites, even if minor, must be reported to the Police Department. This includes bites that happen to you or a family member, by your own pet. An Animal Control Officer will advise you of the appropriate actions needed.
Dangerous Dogs

Under Minnesota State Statute, domestic animals that have bitten or demonstrated aggression must be investigated to determine if that animal is a threat to the public's safety. Eden Prairie Police conduct these investigations and make dangerous animal declarations based on the severity of the incident, including serious bites and unprovoked aggressive behavior.

Information about dangerous dogs living in Eden Prairie can be found on the Dangerous Dogs Map.

Waste
Pick up after your pet! Owners are required to immediately pick up after their pets on any public or private property owned by another. Learn more about the importance of picking up after your dog.
View Full Site