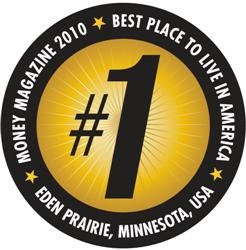 The City of Eden Prairie, Minn. has been recognized as a great place to work and raise a family for many years and is consistently ranked among MONEY magazine's "Best Places to Live."

In 2010 MONEY magazine named Eden Prairie the #1 Best Place to Live in America, and the City has now occupied the top three spots on MONEY's list.

The City received its name in the mid-1800s when it was considered a ‘garden spot’ in the newly developed Minnesota territory. Established in 1858, Eden Prairie remained a sleepy pastoral village until the mid-1900s when the additions of Flying Cloud Airport and Highway 494 put the City on the map, bringing thousands of homes and businesses to the area. Since then, the population of Eden Prairie has grown to more than 62,000 and the number of businesses has multiplied to more than 2,800.

Eden Prairie provides an ideal environment for living well. In addition to attractive residential neighborhoods and affordable housing options, the City boasts nearly 10,000 acres of land designated for parks and open spaces, miles of scenic views and a multitude of breathtaking lakes and beaches.

With a multitude of award-winning restaurants, a super-regional shopping center, top-ranked schools and a myriad of entertainment and lifestyle options, it’s no wonder 95% of residents rate the quality of life in Eden Prairie above average in the City's biennial Quality of Life Survey.

Whether you come for a visit or stay for a lifetime, the City of Eden Prairie is a welcoming community with a thriving economy, and is truly a great place to Live, Work and Dream!